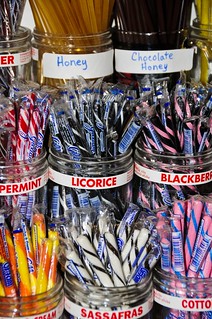 There was a man who sold candy.  Thirty years past its prime, his store held rows and rows of jars with different flavors of stick candy for ten cents a piece.  I’m sure there were other things for sale, but a dime was something a kid could come by easier than a dollar.

Weeks were full of restless drama with the neighborhood kids, crowded buses with seats, sticky from dirty hands and snot, bustling hallways separating the sanctuaries of classrooms, and the after school, latch-key scenario – she wasn’t allowed to go out and play until one of her working parents came home.  Such weeks had this one thing, this occasional adventure, to look forward to.  If the rain let up long enough, she could convince her folks the ground wouldn’t be muddy.  If the sun was glowing and their spirits less taxed, she’d get to go with some friends into to town, and buy a candy stick or two.

The field between the newly developing housing complex and the road into town was flat and low.  She and her friends would walk, skip, or run across its mowed green carpet, and then climb the embankment to the fortified road four feet up.

Cal, her next door neighbor, awkward and lanky with little muscle on his growing frame, was always along for the trip.  They were in fourth grade together and yet, strangely they rarely spoke at school despite their “best friend” status in the neighborhood.  Her parents probably wouldn’t have allowed her to go if he hadn’t been present.

A tiny skeleton of a child with a big head misnamed Mike usually wanted to go.  He was only in the first grade, and lived across from her in the biggest house on the block.  Although he was an annoyance in their daily play adventures, he was always welcome when they went to the candy store, because he always had enough to buy extra for everyone.  Little Mike was either too generous to consider what other candy he could have purchased with his two or three dollars, or else they maneuvered him away from the possibilities to protect their sugar striped interests.

Al and Benny, usually her tormentors at the isolated morning bus stop, were also allowed to go.  Such enemies in the desolate frontiers where parents were typically absent, were not recognized for their evil in the presence of adults.  Not if you wanted to live to tell the story.  Adults clouded the dynamics of power when it came to bullies, and while Al and Benny might cease their abuse for a time (when her father visited their house and spoke with their parents), eventually their anger over being “ratted out” would come to a head.  They brought an actual rope as their threat one morning after.

A year later, Benny would walk off the school bus with a bloody nose.  Confused at his childhood crush on her, he would express himself with fists that bounced harmlessly off her bulky snowsuit.  Realizing her worst fears were coming true, no one was coming to her aid as he pummeled her with this assault, she pulled back and straightened her arm – right into his face.  The motion of the bus may have helped the outcome, and the bus driver was relieved to watch the age of tormenting the girl come to an end.  On that day, Benny gave her the best gift any boy (aside from his brother) would ever offer – his actions opened her eyes to her capacity for courage.